skip to main | skip to sidebar

Apparently it's not meant to be today. 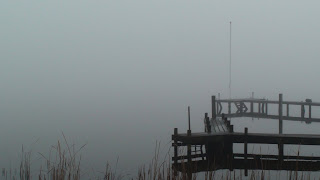 The fog is clearing everywhere but not where it should disappear.
Better luck next year. Happy holidays.
Posted by Breinwave at 11:42 1 comment:

Today not the visibility but the wind is the determining factor. Again there is a big wind shift between runway elevation and the layer starting from a couple of hundreds of feet. From 1000ft upwards there is more than 40kts wind with an angle of 40 to 60 degrees cross on runway 23. Interesting for training purposes, but the turbulence is also challenging for the video crew.

On the ground the maximum gust according to ATC is 29 kts on the last approach which would be on the limit of the max demonstrated crosswind for the DA40 of 20 kts. 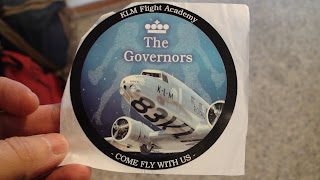 Ummetje survived his logo party. Class 8-3 is now called the Governors. Sounds pretty tough and ambitious (I still prefer "Granny's Pride"). We consider to take him with us as well, but after a quick inspection of his weekly luggage he seems better of going back by train. 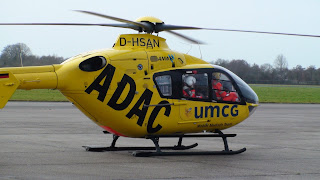 Whilst lined up on the runway to return to Lelystad again we are able to watch some para's perform their tricks right next to us.


Pancake Airlines Crew is trained by Dwarf Powered Gliders (http://www.dwarf.nl/) and Wings over Holland (http://www.wingsoverholland.nl/). Information on the PH-PCA Diamond DA40 can be found on http://www.pancake-airlines.com/. You can click on the title link to see the HD video on DailyMotion.
Posted by Breinwave at 11:56 No comments: 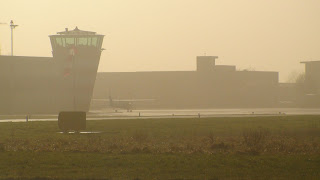 Finally! Nice to have some IMC weather during Marijke's IFR training. During my whole IR training the weather had been to easy. The basics of IFR flying in solid IMC are exactly the same but we were really looking forward to experience what it's like. On this day the circumstances on EHGG in terms of visibility where exactly at the acceptable minima, both in terms of RVR, cloud cover and vertical visibility. 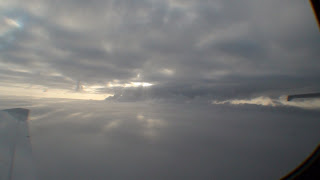 At the same time the cold front was moving from west to east, and visibility and cloud height at Lelystad were already above VFR minima (so we were able to return as well). At first we had to delay the flight plan a little bit because the measured cloud height at Lelystad was still a bit low. Only a thin layer is enough to keep you on the ground. We departed from Lelystad as soon as possible (nr.2 plane that day) to be able to return before the fog would increase again in the final hours before sunset.

Shortly after take-off we were already in VMC on top of the thin cloud layer with beautiful views of the sun playing with the clouds. Further up in the northeast corner of the Netherlands the clouds were getting thicker and the fog reached out to the lower levels.

Now we had to rely fully on the IFR procedures and the G1000 instrumentation during our approaches at Eelde. The local flying schools were not flying, except for a single Beech Baron from KLM Flight Academy. We were not sure whether it would be possible to land. Even if we had to abort or go around, it would already make us happy to be able to practise in solid IMC. 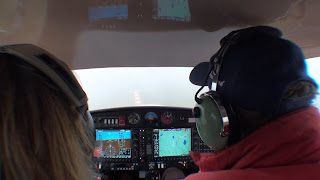 Because of the conditions we decided to make maximum use the G1000 and autopilot; it's able to fly the whole ILS approach on runway 23 down to the decision altitude. From that point at 200ft, if you are exactly on the right track, we found out that you still have plenty of time to make a descent landing. With our approach speed of 90 kts the RVR of about 650m is not a real issue as well. The only real issue in these calm conditions was the vertical visibility, seeing the runway lights on time to be able to continue the descend. 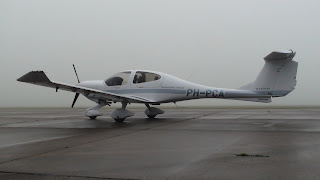 After a touch and go and a full stop, we checked conditions at Lelystad again before selecting the ROLDU1D back to Lelystad. Once in the air you can let the autopilot fly the SID again. The first few minutes after take-off are the most important in these conditions, especially in a single engine plane.

Once in the air we hear both Transavia 780 and 782 over the radio headed for Eelde. If we are not mistaking both of them had to divert to Schiphol in the end; we see one of them passing us on starboard.

Conditions on Lelystad were much better but you could already see the ground fog increasing. As Eelco explains, once the fog really start developing you can often see the ground from above but you loose all (horizontal) visibility when you try to land. The sun is straight over the extended runway, but we use the final part of the instrument procedure for Lelystad as a reference for the landing.


Pancake Airlines Crew is trained by Dwarf Powered Gliders (http://www.dwarf.nl/) and Wings over Holland (http://www.wingsoverholland.nl/). Information on the PH-PCA Diamond DA40 can be found on http://www.pancake-airlines.com/. You can click on the title link to see the HD video on DailyMotion.

Ummetje gets lost - The Making Of 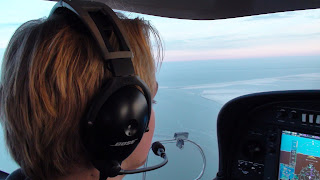 This Friday Ummetje's class at KLM Flight Academy has its Logo Party. As a sneak preview you are able to witness the making of his contribution to one of the topics during this promising evening (sponsored by Playboy!?).

Ummetje is filmed on a trip from Lelystad to Texel and back with the Pancake. You can have a look at the result that was used as input for the total class 8-3 video via http://www.dailymotion.com/pancake-airlines/video/x7r5u9_ummetje-gets-lost_travel. 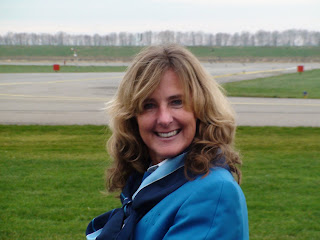 Special guest star Marijke acts as the stewardess for the Unaccompanied Minor, a role that seems to fit her well (a part from loosing her very first UM out of sight in no time).

Ed, Mike and Miriam: thanks very much for your contribution to this video.


Pancake Airlines Crew is trained by Dwarf Powered Gliders (http://www.dwarf.nl/) and Wings over Holland (http://www.wingsoverholland.nl/). Information on the PH-PCA Diamond DA40 can be found on http://www.pancake-airlines.com/. You can click on the title link to see the HD video on DailyMotion.
Posted by Breinwave at 11:40 No comments:

click the title to see the HD video on DailyMotion 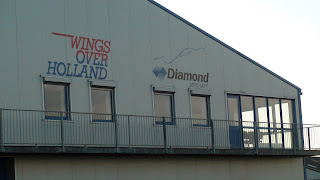 Now it's Marijke's turn to get her instrument rating. She's planning to do her last 3 ATPL theory exams in January so it makes sense to prepare for the practical exam as well. As you might have read before, my experiences with Eelco as instructor and Wings over Holland where pretty good. No wonder that Marijke chose the same combination.

Due to mutual holidays the start up in 2008 is rather slow. There's no need to rush, since we are allowed to fly IFR together with my rating. I don't think either of us would go flying solo IFR just for the fun of it.

Marijke still has about 45 hours of instruction to go. Gives me the perfect opportunity to come along in the backseat. Especially in the winter months this should bring us a couple of new references in solid IMC conditions and/or dealing with lower freezing levels. 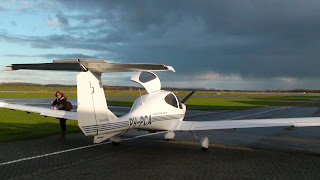 It also gives me the chance to follow the IFR training on video. Existing training video's are more desk based, with screen captures and endless ranges of buttons to push. I wonder how it would look like if we would show the IFR training elements on video from a real live environment. This video is a try out in search for the right format. Please let us know if you have additional idea's or suggestions that might improve the format.

You will still need some button-knowledge to able to do this yourselves. The practical use and the possibilities of the Diamond DA40 with G1000 however are clearly visible. And yes, I will clean the windows and the MFD/PFD next time. In this try-out I used sub-titles in stead of a voice over because it's easier to use the pause button on the video player to read them in detail if you need to.

I will just publish the recordings parallel to Marijke's IFR training, as it should have a logical sequence in it. Let's have a look at it afterwards to determine whether it makes sense to edit it into a more structured way. 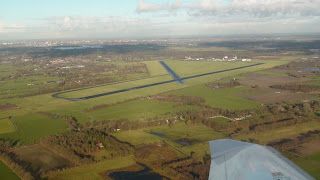 The IFR training flight in this video is on December 2nd 2008 from Lelystad (EHLE) to Groningen/Eelde (EHGG) in the Netherlands. The weather is fine, with some showers and lower clouds. Freezing level is around 3000ft. We file 2000ft LLS DCT EEL DCT SO.

Reaching the Eelde TMA, the ATIS informs us the ILS is temporarily out of service. We here Danny of Eelde Approach saying it will be active again in about 10 minutes. So we start preparing for a VOR/DME approach for runway 23 first, based on own navigation in the direction of the holding at SO. We will make a parallel entry into the holding at 3000ft and will be ready for the approach after one full round in the hold. 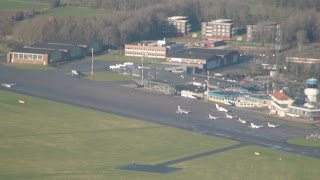 After the VOR/DME approach we will perform 2 ILS approaches, one with maximum use of the G1000 & autopilot and one manually flown with a full stop.

In the meantime I have plenty of time to make pictures and videos of the training and of Eelde airport (and wave at Sander in school or in building B).

The video shows that we are asked to speed up the last one to enable a small training jet behind us to follow along. Although we did our best to expedite vacating the runway, the jet has to make another bonus round. 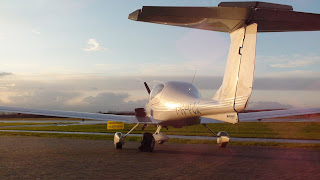 On the way back to EHLE you can see the weather getting a bit worse already as a first sign of the approaching occlusion from the west. Snow is predicted and Eelco clarifies that experiencing a snow shower is totally different from a rain shower. In a snow shower you will loose all visibility and you have a higher chance of disorientation. We got back to Wings well in time before the first snow showers hit the country; so we will save this for one of the next training flights.

Pancake Airlines Crew is trained by Dwarf Powered Gliders (http://www.dwarf.nl/) and Wings over Holland (http://www.wingsoverholland.nl/). Information on the PH-PCA Diamond DA40 can be found on http://www.pancake-airlines.com/. You can click on the title link to see the HD video on DailyMotion.
Posted by Breinwave at 10:03 2 comments: